In 1985 I got an associate degree in graphic art. After graduating, I broke the news to my parents (who paid for college) that I no longer wanted a career in the graphic arts field. Still living at home, my dad made sure the summer of ’85 would not be wasted away by sleeping late. My dad woke me every morning at 8:00 a.m. He made me an egg sandwich and served it with a glass of milk. Then he opened the newspaper and we read the help wanted section together. I picked out jobs that seemed interesting, filled out job applications and went to interviews.

I applied for window designer for a clothing store, a stewardess at the Dutchess County Airport, a proof reader for the pennysaver. One job seemed particularly interesting to me, “picture framer-will train”. I got that job and stayed with that company for eight years.

After I got married in 1992, my husband and I bought a house in Ulster County. I wanted to look for a job closer to home.

I found Catskill Art Supply. At the time they weren’t looking for a framer. I asked the manager his opinion of the framer they had hired for their Poughkeepsie location. He said he was impressed with her work. I informed him that I trained her at my other job. They immediately hired me June of 1993.

Catskill has allowed me free reign of the framing department. By sweating the details I have turned it into the best and busiest frame shop in Ulster County. I love being a picture framer. Every day is a new challenge with terrific results. I use the knowledge I received as a graphic arts major. Color, design, texture, composition is applied to every order I take. Whether it’s a diploma or a $50,000 piece of original artwork, the same compassion goes into each piece. In June of 2013 I celebrated 20 years with Catskill Art Supply. Thanks dad! 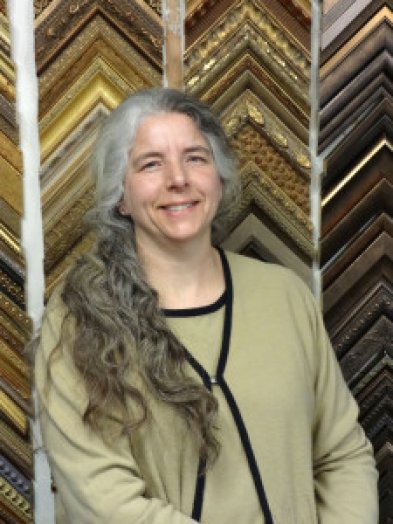